Crataegus species are shrubs or small trees that grow to approximately 5-15 metres (16-49ft) tall, with white through to red flowers depending on the variety. The fruit sometimes called Haw’s can vary in size and colour, from reds through to orange to deep purple, the fruit can be used for culinary purposes for making jelly or jam. Most of the varieties have thorns of various sizes between 1-3cm long. Crataegus are important sources of food for wildlife from the fruit to the many insects that live on the trees. Crataegus monogyna (Common Thorn)  used for native hedge mixes (see Hedging). They will grow on most soils once established even very dry ones. 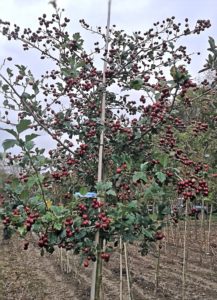 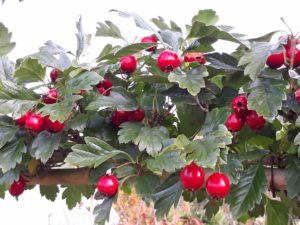 A medium sized thorn with light green lobed leaves, in may large single white, scented flowers followed by cherry sized red fruit which stay on the tree into winter. This tree has a tiered look to it, which pleaches very well (see Pleached). 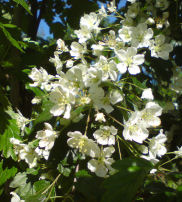 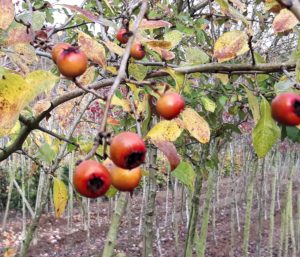 Strong growing tree, with upright habit when young, light green lobed leaves. Flowers on long stalks are white with a lovely scent in May, followed by large red-orange fruit. Leaves will colour in the autumn before falling. 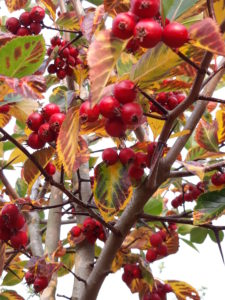 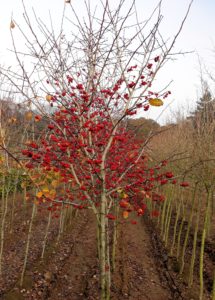 A small wide-spreading hawthorn tree. The small oval leaves of this North American species turn from a dark green to wonderful warm shades of rich orange in the autumn. Clusters of tiny white flowers appear in abundance in May-June providing a food source for insects. Red fruit in October persist well through the winter and into the spring. Long and impressive thorns give this tree it’s common name. 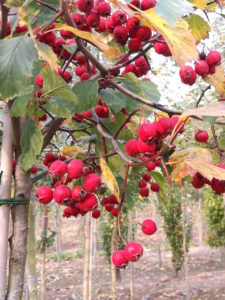 A small round headed tree, with dark green lobed leaves, large white flowers in spring followed by large red fruit the size of Cherries which stay on the tree through the winter. A rare tree in the UK. 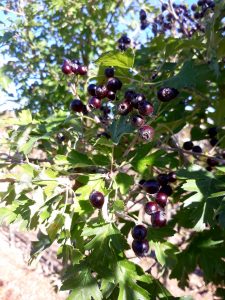 A small low growing- spreading thorn with deeply lobed downy leaves which gives the effect of grey-silver leaves. Flowers are white in groups of 3 or 4, followed by medium sized fruit which are deep purple to black.

This thorn is one of or best sellers, it has an abundance of single, pinkish-red flowers with white centres that appear in May against a lush, glossy green, deeply lobed foliage. The foliage makes a lovely foil for the vibrant flowers. The autumn also brings a spattering of red haws and as the name suggests. The branches are slightly twisted to give another aspect  to this variety. 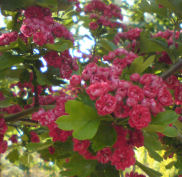 A double red flowered variety, lobed leaves which colour in the autumn. Dense twiggy head, good for screening. Being double flowered they are sterile so doesn’t produce berries.

Double white flowered form of the above, producing a more open head. 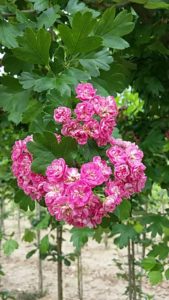 As above but with deep pink double flowers. 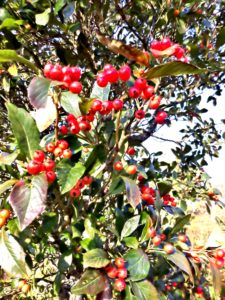 Small garden tree producing a compact crown, holding on to its leaves quite late. White scented flowers in spring with red centres, these are followed by orange-red haws, which persist into the winter, showing up well against the glossy dark green leaves which turns oranges and reds before falling. 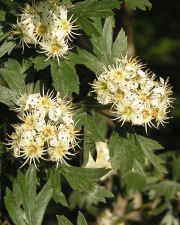 A small tree with a round crown. The crown eventually becomes broader because the branches hang down somewhat. The branches bear thorns approx. 1.5 cm in size. The large, green, glossy leaves are deeply incised. The small double flowers grow in umbels and turn from creamy white to pale pink. Fruit is seldom produced. The fruits are red.

A beautiful tree with slightly hanging branches and large chalky white flowers in May. The branches spread out like long arms as the tree matures. The deeply lobed leaves are silvery-grey, turning yellow and bronze in autumn. Deep orange haws cover the plant in autumn and continue into the winter. 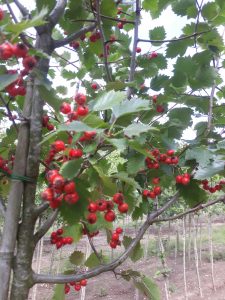 This attractive thorn produces glossy, dark-green, oval foliage which turns glowing shades of yellow, orange and copper in the autumn. The small, white flowers that appear in May and the crimson berries which adorn the branches well into winter are popular with a variety of wildlife, such as honey bees, birds and squirrels – this is one of the best ornamental trees for wild fruits. This hardy Broad-leaved Cockspur Thorn tree will grow well in the very toughest positions, including coastal, exposed, damp and polluted sites, making it ideal for a difficult garden.

A thorn from South-eastern North America, producing small maple like leaves, which change to vibrant colours in autumn. It has a rounded habit and also produces lovely clusters of orange to bright red fruit in late autumn which can last into the following year. 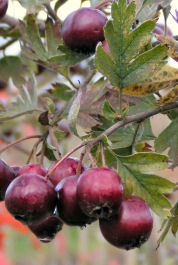 For further details and pricing, please download our .PDF catalogue using the link below:-

E-mail: Please use our contact form to send us a message.

The Landford Trees catalogue is now available for download.